With three of the most prestigious awards under her belt—Star Screen, Stardust and Filmfare—Kareena Kapoor rules Bollywood! The actress bagged the awards under the Best Actress category clearly indicating her numero uno status in the film industry! And this is just the beginning!

While climbing the ladder of success, the actress is also exploring new avenues that ad on to her persona 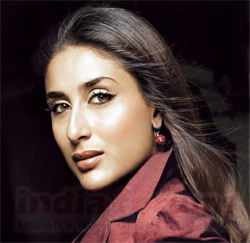 The pencil thin Kareena on Filmfare and Vogue cover has sparked off a sizzle! It is not only filmmakers but even the common man who cannot stop talking about the actress! Kareena is not only the No. 1 star in Bollywood but also an A-list fashion icon. Her covers have been head turners.

Meanwhile her other films include Vijay Krishna's Tashan, a Yashraj Production, that will hit the theatres soon. There's Sajid Nadiadwala's Kambhakth Ishq with Akshay Kumar, Agent Vinod and Karan Johar's next with Saif and Golmaal Returns with Ajay Devgan.

Needless to say Kareena has a packed schedule practically keeping her out of the country of the whole of 2008!

With Crème de la Crème assignments coming her way do we need to say that she is the highest paid actress and model in Bollywood and the fashion industry today?

Plus there are A-line Hollywood banners waiting too!

Like we said the actress is waiting to explore her horizons even further!-(SAMPURN)