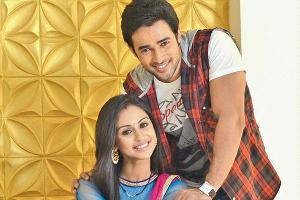 Sony TV' much loved show Ek Nayi Pehchaan has been capturing the attention of the audiences by featuring an interesting track in its upcoming episodes. Until now we have seen Sakshi aka Krystle Dsouza is planning a Mother's Day surprise for her adorable Sharda Maa with the help of Karan aka Karan Sharma and Latika aka Ankita Bhargava.

The latest update that we have got is Karan is all set to file a divorce against Sakshi. Our reliable sources say, "In the upcoming track audiences will get to see that Karan files for a divorce against Sakshi. Till now, Karan only had a doubt that the differences caused between the two of them were due to Aditya. Sakshi gets the letter which Aditya had replaced and realizes the reason behind Karan's disappointment. Sakshi wanted to meet Aditya and tell him clearly not to interfere in Karan and her life and leave them alone. Later, Aditya creates such situations and plots a trap where he calls up Sakshi and puts the phone on speaker in front of Karan and that is when Sakshi asks Aditya to meet her. But Karan by the time already falls prey to Aditya's cunning plan. Karan makes his mind to free Sakshi from the marriage unaware of the fact that Sakshi loves him."

Will Aditya be successful in parting Sakshi and Karan away? Well, that is something which only time can tell us.

Till then viewers, keep watching this space to get more updates and information.

souroj 6 years ago Such a drag, why can't Sakshi tell the whole truth to Karan before going to Aditya

TonsOfWishes 6 years ago even i think they are extending this track like anything...
neways, i love this show and will wait for a fresh track after this

..nisaluvrk.. 6 years ago this is not happening!
they are dragging this track way too much!

Ro-001 6 years ago Its okay with this track as soon as we get a good romantic confession patchup
Kasak and ENP rocks!!!

suresh555 6 years ago Fools paradise. Rather than concentrate on Sakshi-Sharda relationship where Sharda betters herself as a woman and Suresh finally learns Sharda's worth, this stupid track just does not make sense.