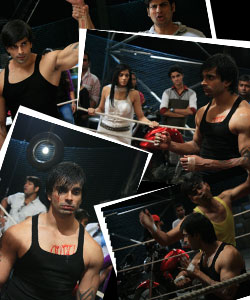 adorable Armaan in Star One serial Dill Mill Gayye as being unprofessional when it comes to his work ethics. But this is a perfect example where the actor has left no stone unturned to prove his dedication towards the work at hand.

As reported earlier by tellybuzz that the DMG team is on the groove to get the old Amy (Karan Singh Grover) back in his old macho man style by getting together a street fight sequence within the ongoing track.

So the latest buzz on the same is that the sequence has not only been enhanced by stylish action moves, great lightning and excellent direction but KSG has added on his personal touch by shooting for the sequence with a badly injured knee.

A Little Birdie informed us that, "KSG has been working for this sequence from past a week and is trying to keep himself fit. But to his bad luck on the day of the promo shoot itself he injured his already offended knee and started limping the next day. So the creative even thought of cancelling the sequence but Karan insisted on going ahead with the shot and completed the entire sequence in pain." 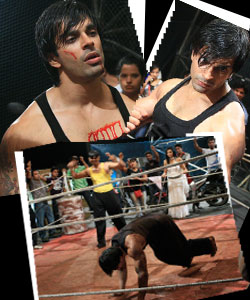 When contacted, Karan Singh Grover asserted, "Yes, I have injured my knee and so at times I lose my balance. But the script demanded the sequence and as actors we don't have option to say a no and I too felt that the fight sequence is a good change in the present track; something that I'm enjoying while performing and the audience will enjoy watching it."

The buzz is also that creative have tried to adapt the stunt and fight style of ace Hollywood actor Robert Downey JR in the sequence.

So, don't miss to catch the action packed sequence in Dil Mil Gaye in tonight's episode at 8pm on Star One.

10 years ago LOVE YOU KARANN!! WILL MISS ARMAAN SO MUCH

sanky13 10 years ago Armaan does'nt have any ego about him he is such a gentlemen....
Whereas SID is rubbish and only thinks about himself......

10 years ago WELL SAW3 DMG AFTER MI=ONTHS TODAY...A LITTLE CONFUSED...HAS SID BEEN PROMOTED A SENIOR CAUSE HE MARRIED DR.,SHASHANK GUPTA'S DAUGHTER AND ISN'T ARMAAN A SENIOR OR HE IS DEMOTED CAUSE HE DID NOT MARRY SHASHANK'S DAUGHTER...??????????

GLAD I DON'T WATCH IT

AND SUPER GLAD THAT KARAN SINGH GROVER IS COMING IN K3 SOOOOOON....

LOVE U KARAN AND OF COURSE AR FOREVER