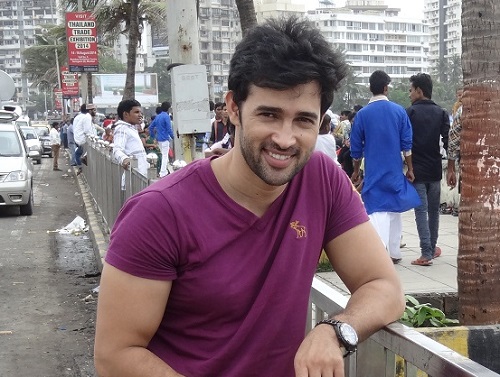 The good looking actor Karan Sharma, who essays the character of Karan in Sony TV's Ek Nayi Pehchaan, recently had been to one of city's popular college St. Xavier's to judge the street play contest happening at the Malhar festival. He was accompanied by the popular actor Sameer Soni.

We heard that, "Karan was mobbed by girls once the event was over. Few of his fans yelled and were seen cheering up for the actor but luckily the organizers came to his rescue. Later, fans clicked pictures with him and after that somehow he managed to get into his car."

Speaking about his experience, Karan told TellyBuzz, "I thoroughly enjoyed judging the street plays. I used to do theater in Dehradun, but I had never seen street plays. It was a learning experience for me, as I came to know about various social issues and topics like 'The Bombay Prevention of Begging Act, 1959' and 'Right to Education' etc."

Karan added, "I was amazed when I came out, the gang of girls was screaming and shouting my name. I clicked several selfies with them. The crowd was increasing every second which lead to  a traffic jam, so with the help of organizers I somehow managed to escape."

kiranrao999 6 years ago YOU are such a sweet person karan..love you a lot..and you doing fabulous work in ekk nayi pehchaan...:-):-)..keep rocking our rock star.:-)

+ 2
6 years ago Karan Sharma , you look so so handsome in the above picture..!
Love you so much

6 years ago Love u Karan ... keep on judging n rocking in this way

6 years ago wow that was awesome karan... good to hear abt you...
All the best n best wishes for you always...
We love you as Kasak:)

6 years ago Ek nayi pehchaan should be in top 10 shows.