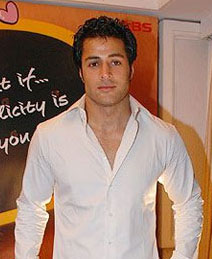 Featured Video
According to our source, "Karan Hukku plays the rich businessman, Nikhil who is basically an arrogant brat. His character will be similar to what Jay Walia was, when Kasamh Se began. Nikhil will come face to face with Jhumki aka Soni Singh who is a self-righteous girl. The manner in which she transforms him will be the story ahead. Later on, she falls in love with him, but there will be a twist here".

"There will enter the brother of Nikhil who will complicate their love story. It's to be seen what future has in store for Jhumki who has been rejected by many because of her bad past. However, this time around she will get married to one of the brothers, but it remains to be seen how the story unfolds", adds our source.

If sources are to be believed, Umar Wani who was earlier seen playing the lead in Vivaah has been approached to play Karan Hukku's brother in the show.

While Karan Hukku will enter the show on March 2nd, the other character will be entering sometime in the end of March.

Jhumki who happens to be the real daughter of the Garodia family lived the life of a prostitute, before she could unite with her real family. It was recently seen that Siddharth (Yash Pandit), the man who loved Jhumki refused to marry her when he got to know of her past.

We tried calling Karan but he was unavailable for comments.

Now let's see how this story between Jhumki, Nikhil and of course, the other character opens up!!

13 years ago ... to have an arrogant rich businessman character! hehehe.

Anyways, on Zee TV, there isn''t really any character like that which has been effective for well over a year and a half... and so I suppose he has no competition at all when it comes to that kinda role.

Therefore, it probably will work well.

13 years ago Man, he is HOT! Maybe he''ll keep my interest in this show. Either way, I can''t wait to see what happens!

no teesra angle plss ...its a request

+ 6
13 years ago oooh...
nice...
two hotties entering the show...
this has got to be good
i really missed karan, esp when his character daksh died in kasamh se... and umar too when vivah ended
lets see now, how the story unfolds...
good luck to all the new characters in the show...