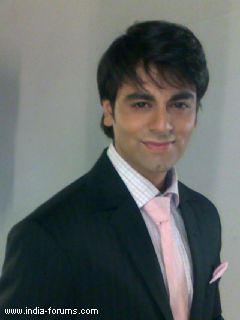 He can play the two ends of acting spectrum be it is the funny and adorable NK or the unscrupulous Ranveer Jaiswal. His lucid acting has won him many fans and hearts and if the news is to be believed our Karan Goddwani has finally lost his heart to someone!

Karan Goddwani is dating someone and doesn't wish to reveal too much about the relationship. She is not directly from the television industry but is a model and a known face in the advertising world.

We spoke to Karan on this latest development but he decided to keep mum!

We would like to wish Karan all the best and would tell the lucky girl that she has bagged a gem!

+ 2
8 years ago goodluck with that karan aka nk! wish you find someone in ipkknd aswell

8 years ago aww lucky girl! thats so sweet that wants to keep it confidential! good luck!

8 years ago aww one more handsome hunk is reserved now

8 years ago kewl!
btw is IF really sure dat she isn't from television industry?
I mean even some 1 else said gud bye to her single status!
how can I forget his linkup rumour during his ODHANI dats!!!

8 years ago So happy for you karan your doing fab in ipkknd as NK!! All the best

8 years ago NNNAAAHHHIII!!!!!
Why Karan? Why?! What about me?!
LOL, just kidding. Congrats Karan!
Love you as NK!

8 years ago Great news for Karan Goddwani. Love his acting:)