View Profile
Karan Sharma, who we all know as Aniruddh of Star Plus' Baa Bahu aur Baby, has been politely accepting compliments from co-actors and crew members regarding his resemblance to two very famous actors of Bollywood! 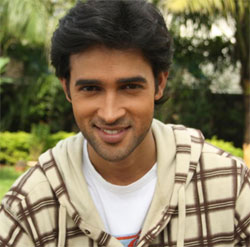 Featured Video
Karan says, "My co-star Benaf Dadachanji keeps telling me that I look like Hrithik Roshan. It all started with a hospital scene. After we shot it, Benaf looked at me in the monitor and exclaimed- 'Oh my god! You look just like Hrithik Roshan!' I just managed to graciously smile." Karan adds, "I'm very fond of dancing. I've even taken up professional training for it. So in between shots I do a step or two and Benaf would again compare me to Hrithik."

Apparently, there is more than a Hrithik face hidden within his! Karan says, "Many of my friends and colleagues keep telling me I look like Shammi Kapoor. I say, ok. Go on. Compare."

However, Karan has mixed feelings about such comments. He says, "Although it feels good that you bear a resemblance to legendary actors, there comes a point when you want to be recognized for what you are. I am in this profession to make my own individual identity and would be the happiest if I am known for being Karan Sharma!"

We hope you get what you aim Karan…

13 years ago The first time he showed up on screen on BBB, me and my mum both said out loud "Hrithik Roshan!"

He really does look like HR, but anyway, he's quite an impressive actor and I hope he can break out of being compared to BW celebs to create his own image....

blossom11 13 years ago totally agree to karan...one needs his/her own individual identiy
good luck karan...love to see you in bbb

+ 3
13 years ago There are too many Hrithiks around. The original itself is so boring.

13 years ago he looks like harman baweja more than anything..but he's really cute :)

13 years ago nah he dsnt luk like hrithik! hes cute though!

+ 2
13 years ago he is good looking cute but i dont find him look alike of Shammi Kapoor or Hrithik Roshan.. infact i see anyone's resemblance in him that is of Dharma of Dharmaveer (sorry forgettign his name at the moment)