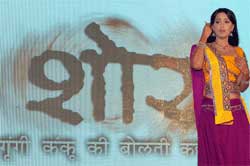 But there will be yet another surprise for the viewers as Shorr Goongi Kankoo Ki Bolti Kahaani will see a new track and also a slot change.

Our source states, "Shorr will see a major turning point wherein the protagonist Kankoo (Snigdha Srivastava) will get her voice, thereby opening up a new track. With this, the by line of the title which previously read as 'Shorr Goongi Kankoo Ki Bolti Kahaani' will now be changed to 'Shorr Kankoo Ki Kahaani Ab Kankoo Ki Zubaani'.

We hear that Bitto might be going off air and Shorr is expected to take Bitto's slot from January 24th.

When contacted, Producer Kinnari Mehtaa of Jay Productions refused to comment on the high point in the track, but told us, "Yes there are a lot of changes happening in the show. We are trying to make the content better, and there will be a new flavour seen in Shorr".

We tried calling Mushtaq Shiekh, Creative Director, Sahara One but could not get thro' to him..

guddididi 9 years ago does anyone knows that a show is there like this..god why do these people waste money for stupid projects like this