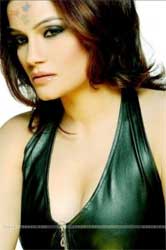 Kanika Maheshwari who essays the important role of Sasha in Star One's Geet Hui Sabse Parayi is apparently exiting from the show, the reason being that the actress has bagged a meaty role in Shashi and Sumeet Mittal's new show on Star Plus.

For the uninitiated, TellyBuzz had earlier reported that Kanika has bagged the negative lead role in the Star Plus show, wherein she plays the wicked bhabhi in the male lead's family. The show will see Anas Rashid as the male lead, while new face Hina will play the female lead. The show has a Rajasthani backdrop and will be a unique love story.

We hear that Kanika has apparently decided to quit Geet for this show. She wants to put in more efforts and give more time to the new show.

A source told us, "Kanika Maheshwari is certainly planning to quit Geet, as she believes in dedicating lot of time for a show".

We too hear that the production house has not decided whether to end the character of Sasha or to replace her with some new face.

If sources are to be believed, there is a higher chance of replacing a new actor in Sasha's role as they just cannot do away with the character as it is important to the story line.

We tried calling Kanika Maheshwari  to know more on the buzz  but she clearly refused to comment on the same.

Whether Sasha makes an exit or a new Sasha enters Geet Hui Sabse Parayi is something to wait and watch!

JaveriaM 9 years ago she is a good actress so all the best for her new role and i hope they find a good replacement.

abd_20 9 years ago beginning dadi was replaced & it did not make a difference but Kanika was good at her role...

shivani003 9 years ago She's a good actress. Iam guessing this is a more meatier role. All the best to her. She had done a good job as Sasha

-veena.shona- 9 years ago heyyyyy kanika
plssss dnt quit Geet
no 1 can play Sasha as nyc as u

MasoomaBukhari 9 years ago i really liked her as sasha..! will miss her!

Blueberry_07 9 years ago All the best Kannika! It'll be hard to imagine another Sasha in the show. U kinda owned the character there.

So I rather they end this character as compared to bringing in someone as a replacement.

Anupamaa: Paritosh and Kinjal exchange rings but who is the ...
58 minutes ago