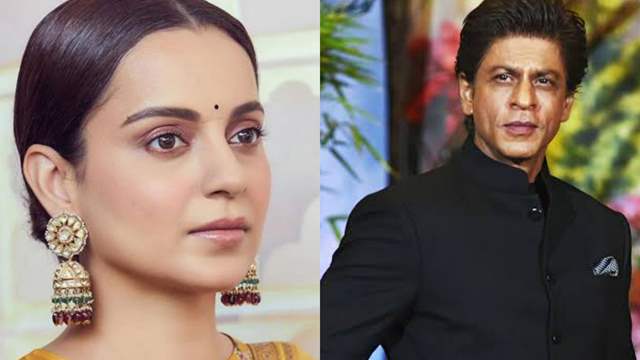 Amid the ongoing cruise drug case involving Shah Rukh Khan's son, Aryan Khan, where several B-Town celebrities are coming out in solidarity with the superstar and extending their support to him and his family.

Meanwhile actress Kangana Ranaut has taken a dig on him.

She indirectly called out Shah Rukh Khan by posting a trivia about Jackie Chan apologizing post his son’s arrest in a drug case.

Taking to her Instagram handle, Kangana shared a collage wherein one picture shows global star Jackie Chan and his son while the other one features his son being taken away by the cops.

'Jackie Chan officially apologized when his son got arrested in a drug case in 2014! He said ‘I’m ashamed of my son's act, this is my failure and I will not intervene to protect him' and after this, his son was jailed for 6 months and also apologized'. Kangana captioned this post as '#justsaying'.

This is not the first time Kangana has reacted to this case.

Kangana dropped a long post saying that those who are supporting Aryan Khan are 'Mafia Pappu'.

In her note, she wrote,

'Now all Mafia Pappu coming to Aryan Khan's defence...We make mistakes but we mustn't glorify them... I trust this will give him perspective and also make him realise the consequences of his actions... Hopefully, it can evolve him and make him better and bigger. It's good not to gossip about someone when they are vulnerable but it's criminal to make them feel that they did no wrong.' 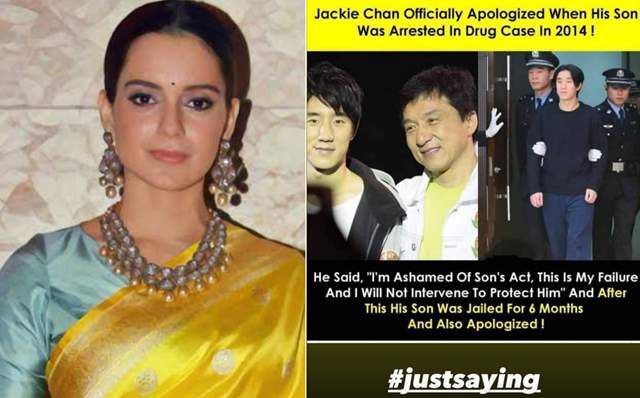 In a major setback for megastar Shah Rukh Khan's son Aryan Khan, a Mumbai court on Friday rejected his bail plea, and of two others who were among the 8 arrested accused in the raid on an alleged rave party on a luxury cruise ship.

Since then Aryan Khan and other accused were sent to Arthur road jail in Mumbai.

Aryan Khan got arrested on October 3rd in a drug case and is currently on 14 days of judicial custody.

1 months ago Disgusting human being. IF should stop giving her priority

1 months ago Kangana, make your parents apologise for you too. Are you still in touch with that drug dealer of yours?

+ 7
1 months ago Kangana, parents are not responsible for what adult children do. This is why we do not judge your parents for you being a drug addict, purveyor of married men, and political agitator for self-gain.

1 months ago What logic is this in Asian societies? If your adult child does something wrong you shouldn’t have to apologize. The only reason person who needs to apologize and make amends is Aryan himself.

1 months ago She said correct . I really wish her father also apologized when she became a drug addict and eloped from home to be an actress. As per her her father never supported her and always put his son above the girls .