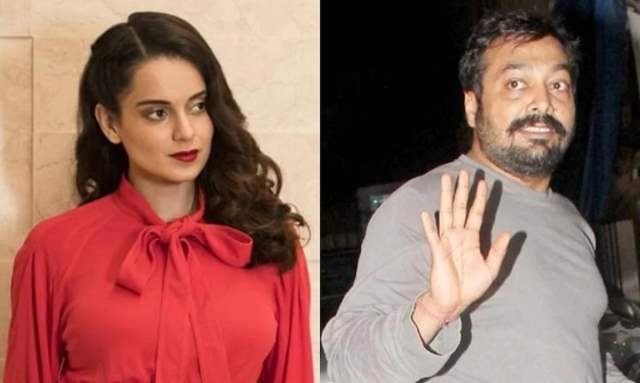 Kangana Ranaut and Anurag Kashyap’s twitter spat grabbed many eyeballs on Twitter. The duo indulged in a sarcastic war of words and missed no opportunity in pulling each other down on social media.

We all are aware of Kangana’s outspoken behaviour on Twitter, which has landed her in multiple controversies, right from her brawl with the Shiv Sena to her ugly tiff with Urmila Matondkar. However, this time, her rift with Anurag Kashyap started after the filmmaker replied to one of her tweets with an extremely sarcastic response.

Kashyap mentioned how 'she is the only one Manikarnika' and he even asked her to attack on China. Kangana being Kangana hit back with a befitting response and stated that she was otherwise using metaphors to express her take but Kashyap took it literally. She even called Kashyap 'mandhmudhi'.

And now, this fight of ‘metaphors’ has only intensified. Reacting to her tweet, Anurag Kashyap hit back at the actress saying that ‘her whole life is a metaphor.’ He tweeted: "Your life has become a metaphor now. Everything is a metaphor. Every allegation is a metaphor. You have given so many metaphors on Twitter that the public has started calling the unemployed generator as your dialogue writer. Nobody knows better than you how to improvise."

In response, Kangana tweeted back as she stepped back from the fight, "Oh!! I see you having an embarrassing meltdown here, hardly making any sense, anyway don’t want to make it worse, I step back, don’t feel bad friend please have hot haldi milk and go to sleep, tomorrow is a new day."

Furthermore, Kangana clarified her stance and asserted that while she might look like a person who fights a lot but she is never the one to start it. She also mentioned that she will quit Twitter if proven wrong.

Kangana wrote on Twitter, "I may come across as a very ladaku person but it’s not true, I have a record of never starting a fight, I will quit twitter if anyone can prove otherwise, I never start a fight but I finish every fight. Lord Krishna said when someone asks you to fight you mustn’t deny them."

Do you think this was the end to Kangana and Anurag's twitter spat or the beginning of yet another round of verbal war? Share with us in the comments below.

Cinesoda 1 months ago Immature people with nothing better to do. Which stars from other parts of the world behave like this? Embarrassing.