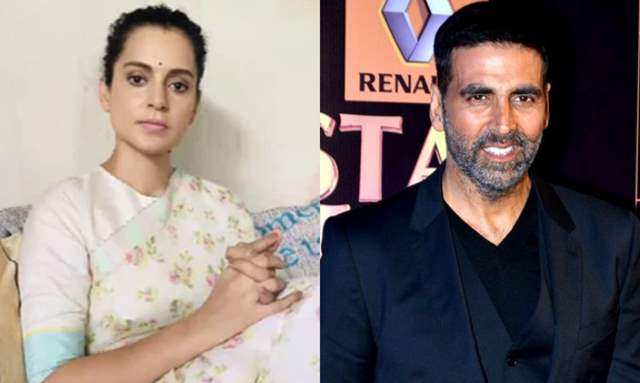 Kangana Ranaut is quite outspoken about the issues that interest her and she has actively raised concerns against several Bollywood’s A-listers. Now, the Queen actress has once again targeted the B-townies for making secrete calls and messages.

Taking a dig at Bollywood and its stars Kangana asserted that Bollywood is hostile and praising her publicly can get them in trouble. She went on to claim of receiving “many secret calls and messages even from big stars like Akshay Kumar” to praise the trailer of her upcoming film Thalaivi. She also made comparisons with Alia and Deepika and mentioned that their films are openly praised.

“Bollywood is so hostile that even to praise me can get people in trouble,I have got many secret calls and messages even from big stars like @akshaykumar they praised @Thalaivithefilm trailer to sky but unlike Alia and Deepika films they can’t openly praise it. Movie mafia terror,” wrote Kangana Ranaut in a tweet on Wednesday evening.

Kangana wished that Bollywood should have been restricted to art and not indulged in power play and politics when it comes to cinema. She went on to clarify that her political views and spirituality should not be targeted by bullying, harassment, and isolation. She concluded by highlighting that if these things happen they obviously she will win.

“Wish an industry of art can be objective when it comes to art, and not indulge in power play and politics when it comes to cinema, my political views and spirituality should not make me a target of bullying, harassment and isolation but if they do, then obviously I will win …” Kangana Ranaut added in a tweet.

Kangana Ranaut’s upcoming film Thalaivi features the late politician's journey from being an actor to becoming Tamil Nadu CM. The 34-year-old actress left no stone unturned for getting into the skin of former Chief Minister J. Jayalalithaa. From the looks of it, the Panga actress underwent a massive physical transformation and the trailer of the biopic will definitely surprise you.

13 days ago Media should ignore this nutcase and stop publishing anything related to her. She can go talk to animals in zoo if they will hear her out. Anyhing happens in anyone's lives, this woman has severe tummy ache