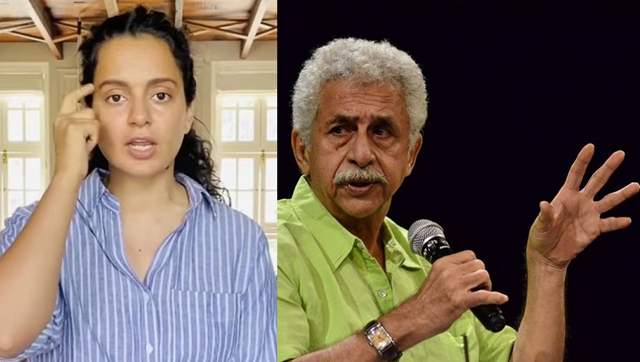 Sushant Singh Rajput's sudden and tragic demise has re-ignited the nepotism and the insider-outsider debate. And also sparked many talks around favouritism and bullying in Bollywood! Many celebs from the Hindi film industry have shared their views on it.

Now, veteran actor Naseeruddin Shah, in a conversation with India Today Television, denied the presence of a 'movie mafia' in the Hindi film industry. When asked about the probe in Sushant Singh Rajput death case, the politics involved in it, and the coverage by certain media houses, Shah said that the people who have frustration in their mind towards the industry are 'vomiting it out to the press'.

In one of his statement, he even took a dig at actress Kangana Ranaut, calling her 'half-educated starlet. He said, "No one is interested in the opinions of some half-educated starlet who decides to take it upon herself to you know, get justice for Sushant. If there is justice that needs to be done, I think we need to have faith in the process of the law and if it is none of our business I think we should we should not concern ourselves with it."

Now, Kangana has reacted to his remarks and in a series of tweet she has given him a classy reply.

"Thank you Naseer ji, you weighed all my awards and achievements which non of my contemporaries have on the scale of nepotism,I am used to this but would you say this to me if I were Parkash Padukone/Anil Kapoor’s daughter ? (Slightly smiling face smiley)"

In another tweet she wrote: "Naseer ji is a great artist, itne mahan kalakar ki toh gaaliyaan bhi bhagwan ke parshad ki tareh hain,I rather watch amazing conversation we had about cinema and our craft last year and you told me how much you appreciate me... (Folded hands emoji)" 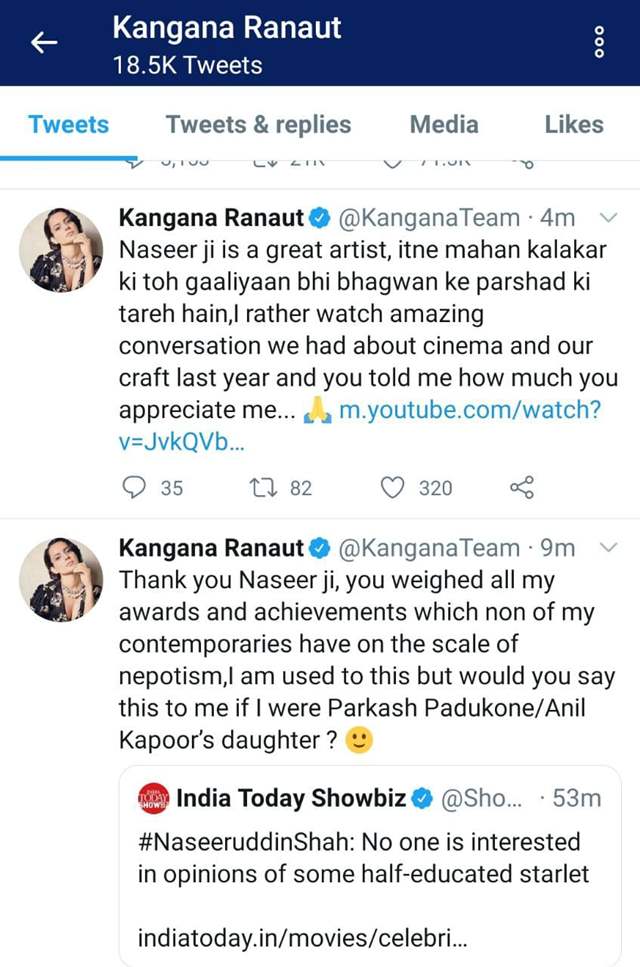 PerfectStart 2 months ago This woman is a mental patient and provides a lot of entertainment🤣🤣 praising herself all the time and bashing everyone else🤪😜 Correct me if I am wrong I read an article in which SSR's father said that kangana never contacted any of SSR's family member in her so called fight for justice for sushant.Is it true and btw I added so called it was not in article😂

sunaina02 2 months ago Whatever Kangana is , she is not a starlet . She is a star and national award winning actress.

Rubyreadyhui 2 months ago Kangana is many miles away as being called respectful or classy. Both the sisters are downright nasty and revengeful. 🤢🤮

tabby999 2 months ago Nasser sir u say no movie mafia and u believe in law ....I find it absolutely hilarious hearing from you ..don't u feel insecure ??. Kangana is much better than all u fake people ..

Needblessings 2 months ago what looser women, why dragging DP and Mr. Padukone? Actually Nasir sir is wrong this vile lady is NOT half-educated, she is uneducated. Toxic , fake, opportunist. What a disgusting lady.

Different12 2 months ago I seriously don't understand why Prakash Padukone Sir is being dragged into this mess created by people. I just wish people respected things and dint turn Sushant's family's loss into a media circus.

Hannie_Fan 2 months ago Can someone pls tell me what was the need to include DP in her tweet. Har cheez mein faltu mein DP ko target karna is absolutely nonsense ...

enigmatic_zephy 2 months ago lol. naseer must have really aged.. if he thinks she doesn't have a voice.. it is way more reliable than his. if someone starts opening his chapters, he'd know people were just being patient with him