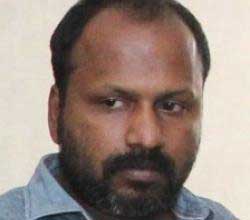 Malayalam filmmaker Kamal K.M. has been named the winner of 16th Gollapudi Srinivas award for his debut thriller-drama "ID". The award will be presented Aug 12 here.

Veteran filmmaker Balu Mahendra said Kamal was chosen for making his film in a unique manner.

The award, given to a debutant every year, has been constituted in the memory of director Gollapudi Srinivas, who died at the age of 26. He died while filming his debut Telugu film "Pelli Pustakam" on Aug 12, 1992.

When a labourer collapses while working at a woman's house, she takes the responsibility to find out who he is as he carries no identification on him. This is the story of "ID", which is produced by a group of independent filmmakers under the name Collective Phase One.

Some of the filmmakers, who were conferred with the award over the years, include Aamir Khan ("Taare Zameen Par"), Amit Rai ("Road To Sangam") and Anusha Rizvi ("PEEPLI [Live]"), among others.

The award was first announced in 1997 - when Leslie Carvalho won it for the English film "The Out House".