COLORS' Laagi Tujhse Lagan, produced by Playtime Creations has recently gone down in the rating chart, but the makers are very confident that the coming track which will witness the revelation of Nakusha's (Mahhi Vij) real beauty will once again propel them to the top!! 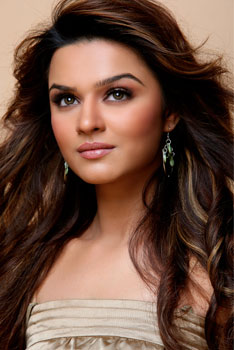 While preparations for Nakusha and Dutta's (Mishal Raheja) wedding are in full swing, Kalavathi (Aashka Goradia) has her task cut out as she gets busy with the mission of finding out the mystery of Nakusha.

As per the present story line, Kala has got a minute suspicion about Nakusha, wherein she finds some color in her hand while putting some jewelry on Nakku. She then goes to Nakku's room to investigate, and is surprised to see the kajal box there. This creates further intrigue in her mind. The future episodes will see Kala going to Nakku's basti to find out more about her.

Our source tells us, "Kala will completely be seen in an investigative mode and viewers will get a chance to revisit Nakku's earlier lifestyle along with Kala. The scheming lady will finally pounce upon the fact that Nakku is a beautiful girl who is forced to hide her beauty behind the dark color. With an intention of disclosing this bitter truth to Dutta, Kala gets back home right on time, just before the wedding ceremony of Dutta and Nakku".

If sources are to be believed, this revelation will have a major repercussion on the couple's life.

We hear that November 13th will most probably be the D-day when Nakku's biggest secret will come to the fore!!

When contacted, Aashka confirmed the news and says, "Yes, I have started shooting for the scenes where Kala starts investigating the dark mystery that Nakku is hiding. She has no idea as to what it is, but is surely on the hunt".

How will Dutta react when he gets to know about Nakusha's true color? Will Kala's attempts to stop the ongoing marriage succeed?

Well, the month of November will probably decide the fate of Nakusha as well as the serial…

Ani_La_Iam 9 years ago In "Love Story" and "LTL" Mishal acting is brilliant.

Mishal you got my full support.

Nels 9 years ago I am surprised .... just to create rift, Kala got some one killed?

lizdarcy 9 years ago Love this show. Fantastic job by all the actors! Tasha rocks!