Bollywood's hottest on-screen couple is back after seven years. Kajol has finally agreed to do Karan Johar's next titled 'My Name Is Khan' and feature as Shah Rukh Khan's wife in the film about an Indian couple living in the US.

When the media reported the news of her being considered for the role in 'My Name Is Khan' early last month, the straightforward actress had retorted by saying that without reading the script she would not give consent to work in a movie even made by her husband, leave alone Karan Johar or anybody else. 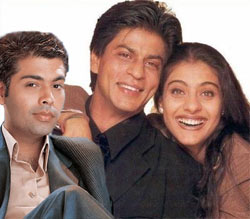 According to a source close to the production house, soon after that she went on a holiday with her family and there was a lull on 'My Name Is Khan' front. Now it is learnt that she has given the green signal to the movie to be directed by Karan.

Though the movie is scheduled to be launched in December, a buzz has already started that Karan has a winner in his. Not only because it has a hit pair heading the cast, but also because the composer trio, Shankar-Ehsaan-Loy, has scored some 'outstanding' tunes for the movie.

Those who have heard some of the tunes composed with dummy lyrics say that one of the highlights of 'My Name Is Khan' will certainly be its music, as it always is in a Karan Johar production.

The launch of 'My Name is Khan' has been deferred till December because at present Karan is busy with Dharma Productions' other movies, including Abhishek Bachchan, Priyanka Chopra and John Abraham starrer 'Dostana'. The film is due for release later this year.

Karan is also planning to launch his erstwhile assistant Ayaan as a full-fledged director. Incidentally, Ayaan is Kajol's first cousin.