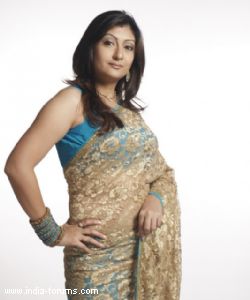 And finally the true Indian Bahu has it proved again!

A source says, "Juhi Parmar finally walked out as the winner of Bigg Boss Season 5. Amar Upadhyay and Sky (Akashdeep Saigal), were the first ones to get eliminated from the final five, followed by Siddharth. And after that it was between Mahek Chahal and Juhi Parmar Shroff in the final two."

Unlike the previous seasons, the female contestants ruled the house this season and finally Juhi proved to be the ultimate winner.

9 years ago Ok, So, now if any kid asks for food Juhi won't have any problem in feeding them. As in the show 'pati patni aur woh' on ndtv imagine she did not buy pasta for two kids so that they can save money even though she & her husband were given Rs 3000/- a week to run the house. What a woman! Great!!!

+ 5
9 years ago didnt expect her to win, even though i wanted either sky, mehek or amar to win
but congrats to Juhi..

9 years ago A stupid show.God knows how people were watching it.A complete waste of time on the channel.

+ 4
9 years ago OMG this just goes to show that this show is nothing but bakwaas because the most undeserving person ever won it.

this is simply crap and I still can't believe it.

9 years ago i believe that juhi was somewhat undeserving but i loved that amar and sky were eliminated before Sid... hahahaha bohat fitt yaar... a tight slap on sky's face who thought he's the saint in the house...also glad that mehek atleast was in the top 2.. if juhi won wotever..congrats to her... but i didnt like her in ppaw and i didnt like her in bb5...

NickyRafique 9 years ago Juhi winning BiggBoss 5 is such a BIGGG... Dissapointment.Can't believe how she won i mean if this was all down to counting on audience voting. I can't understand why people in india would vote for such a horrible, sly and fake person like Juhi,she had supported the bad people like sky.Mahek really deserved to win she went through alot on the show because of sky and other housemates and dealt with the sitautions really well, was consistent and is vey good human being. I'm very dissapointed with results and the show and would never watch the next season of bigboss if people like juhi win.

9 years ago congratulations...though i started hating juhi after seeing PPAW...but after comparing to all contestants in BB5 i think she was d only one who deserves this winning..once again congratulations juhi...

9 years ago Disappointing result. She was not deserving at all.