Fans of Juhi Parmar rejoice, as your favorite Kumkum will now be seen on the big screen. 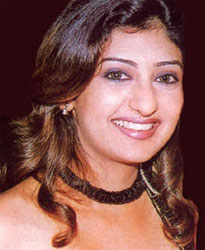 Featured Video
She has started shooting for a comedy film called Padduram. "Suresh Menon and I play parents to a child. I can't reveal much about the story except that it revolves around our kid and how we deal with it".  On the shift to Bolly, she says "Times have changed and nowadays we are known only as actors and not as TV and film personalities".

Besides this film, Juhi is also busy shooting for her upcoming SAB show titled 'Yeh Chanda Kanoon Hai'. "I play a lawyer called Chanda in this comedy court room drama which should start airing by this month end or early August. It's a matter of pride to again play a title role. This episodic serial will showcase various funny cases each week.  Asif Sheikh ( Yes Boss) will be the lawyer opposite me, and veteran comedy actor Tiku Tulsania will essay the role of the judge."

Juhi clears the air about her not anchoring second season of Chhote Miyan. "The dates were given quite late to me and by then I had already committed myself elsewhere. It's sad that I cannot take part in this show anymore, it was fun".
Coming to Hans Baliye  Juhi says its been a growth for her baliye  Sachin. "I have done comedy before but not him, and is not his natural genre. Hence it is a matter of satisfaction that he has improved with very outing. The praise of the judges gives us the energy to put in that extra mile".  On below-the-belt jokes, Juhi says "There have been only a few on our show. I can't really speak about others, but we will never do it".

She also rejected the arguments given by some loosing contestants of Hans Baliye, that the scripts were bad. "We were given good material and it is also up to you to choose the one you like".

In closing we could not help but ask Juhi about the winning Jodi of Hans Baliye, to which she categorically said, "I don't want to comment on this".

all the best to juhi for bollywood

rajal_abc 13 years ago o my god I'm really happy to hear this.....juhi is doing a film,and d comedy show is also d one I'm waiting for.
goodluck juhi and loaaaddddddsssss of love
rajal

13 years ago well congrats Juhi and Sachin for reaching the semi final round and yes dear BEST OF LUCK for bollywood... i know she will def rock !!!