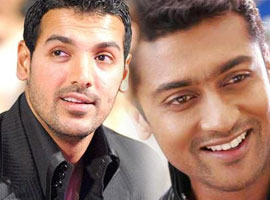 John, John, John. Now, who's willing to explain to him that a man who is known to be an avid female heart burglar just won't be able to look convincing as a police officer?

Okay, bad joke, ears have been pinched. But yes, this is true that John Abraham is looking forward to play the role of a cop in an upcoming Bollywood remake of Tamil film, Khaaka Khaaka !

Suriya, the Tamil film star who starred as the protagonist in Khaaka Khaaka has been paid many visits from John Abraham, because the two stars live relatively close to each other in Mumbai. John wants to portray his role to the best of his abilities, and essentially wants to do complete justice to Suriya himself. The budding friendship between these two is one to admire. Why, you ask? Well, trends and gossip claim that it isn't exactly common for an actor who is enacting a role that has been previously assumed by another actor, to consult the veteran actor and actively earn permission and guidance!

There's more! Well, as the title of this article insinuates, John wants to wear a policeman uniform since he's playing a policeman, but the director of this film, Nishikant Kamat, had other plans. So ziddi was John about being able to wear the vardi, that the script is being amended, so that the uniform can get back into the picture, literally!

Oh, and John will most probably be sporting nice big mustache!

This role sounds like a very interesting one, and John's involvement and interest in the role, is only making us look forward to this movie, all the more. Good luck John!
And we're sure you'll pull off that uniform and stache with much zeal!
4 Likes