Believe it or not..Bollywood hunk John Abraham also dealt with pimples in his younger days. 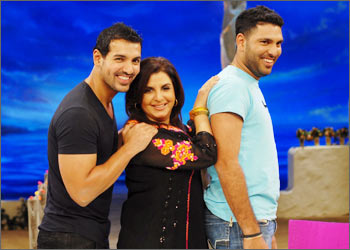 The topic for this Sunday's episode (September 19) on STAR Plus' new chat show, Tere Mere Beach Mein is 'Male eye candy' and the celebrity guests are  the very hot and dashing John Abraham and the ever charming Yuvraaj Singh..

John speaks of having so many pimples when he was young that he always used to look down and speak to girls. He says, "I used to be very shy..There was a time when my face was full of pimples and I just never used to look up when in the company of girls so much so that they used to feel that I was such a shy, sweet, decent boy. Only I couldn't tell them that my face is full of pimples and that's the only reason I'm looking down!"

John then goes on to reveal that he always lost out to girls he had a crush on in school due to his shyness. He says, "I was very shy in school and all the girls I had a crush on liked someone else…now it's changed a bit."

Farah asks if it was then Bipasha who 'pataofied' him and John quips, "No, I had changed totally by then… I had become like a raging bull."

Watch John reveal his fears and what makes him tick on STAR Plus' Tere Mere Beach Mein, on Sunday, September 19, from 9 to 10 pm.

blossom11 11 years ago liked the episode.waiting fo next episode to see HRITIK

radhika_21 12 years ago thanx!
singh is king rocks and i agree it will break records at the box office!