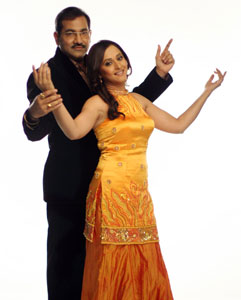 This Friday saw the exit of Mrinal Kulkarni and Sudesh Bhonsle from Jjhoom India. The Solah Singaar actress did not seem too disappointed with her elimination from this Sahara-One reality show. "I am not a professional singer, we all have come to learn, so if I am out, its fine", says Mrinal.

On her mentor Sudeshji's comments that she has a stage fright, Mrinal defends her self and says,
"We actors are not used to working in so much noise, hence I do get a bit nervous!" Also she agreed that fast numbers are not her forte. "I personally like slow songs like Kabhi Kabhi, which was my best performance",adds the versatile actress.

Mrinal further admitted that, may be she had not put in enough time for rehearsals due to her other commitments( Marathi films ). "We all learn from our mistakes, and I will surely put in that extra effort in the wild card round."

In closing, she refused to blame the format like some other eliminated contestants did, for her exit. "All the jodis which have been shown the door including us deserved to go", quips Mrinal. But what about Apara ji ? "Yes, that unfortunate incident should not have happened", she ended.

zaib-e 11 years ago i am a big fan of mrinal kulkarni and its a big shock! they were wonderful singers!

14 years ago she was ok compare to other contestants, and this is competition

+ 3
14 years ago thanks.
she's real pretty and i ove it when she sung khabh khabi

+ 8
14 years ago I dont get Sahara One...otherwise i would have loved to watch this show..But to the fans of this show..this is a shock