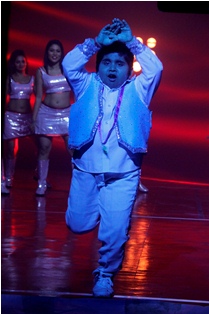 We have seen the wonder boy Akshat Singh showing his talent on the stage of India's Got Talent Season 5. Now, this talented kid is all set to burn the dance floor of Colors' popular celebrity dance reality show Jhalak Dikhla Jaa Season 7 where he would be competing with the elders to win the trophy.

Though there's still time for the show to hit the television screens but while shooting for the promo shoot we heard that Akshat was praised by everybody on the sets for his energy level. Informs our source, "Even though the promo shoot was tiring but it could not affect Akshat even to a bit and the kid manged to give his best till the end with the same energy level which he had at the beginning of the shoot. He was praised by everybody on the sets and his energy level was compared by to the energetic star of Bollywood Ranveer Singh."

We spoke to Akshat and he told us, "I am happy and doing my best preparations for the show. I danced on Baby Doll and Tune Maari Entriyaan songs for the promo shoot where I made a mast entry. Everybody on the sets complimented me saying - you are doing very good Akshat and they also called me - Chota packet bada dhamaaka!"

Well it seems Akshat is going to give a tough competition to all his competitors on the show. We wish Akshat good luck for the show!