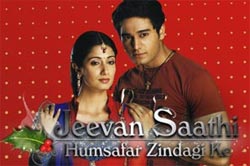 COLORS' Jeevan Saathi which tracks the trials and tribulations of Viraj (Vani Sharma) will see its logical end very soon.

According to our source, "Jeevan Saathi had been under the scanner for quite a while, but now the decision to wrap up the show has been taken. The show is all set to wind up in the first week of September. COLORS has many new concepts in the pipeline, hence this change was essential".

"The unit and actors have not been officially informed about the closure, but they will get to know very soon", informs our source.

We called Producer Hemal Thakkar of Playtime Creations, but he refused to comment. We could not get any confirmation from the officials of the channel till the time we filed the story.

11 years ago Love u sooo much Gaurav...ur the bestest...they spoilt JS by sidelining GK

13 years ago I liked the show. Well, that's ok, it was prolonging anyways.

+ 4
13 years ago This is very sad. I liked this show and Vini was so beautiful.