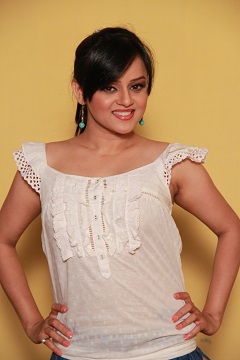 You have seen her playing a submissive village bella, an obedient bahu and a malicious care taker, and now it's time for Jayshree Soni to step into a romantic comedy role on SAB TV's popular show Chidiya Ghar. And if the sources are to be believed Jayshree has gone under a complete image makeover for her new character.

Till now, Jayshree has been seen wearing Indian clothes on screen in all her shows. For the first time ever, the viewers will see Jayshree as a young and modern Bengali girl who loves to wear western outfits. Jayshree's character Manchali, fondly known as Macchli is a very chulbuli and outgoing girl.

About her new look, Jayshree says, "My character Macchli is an up-to-date girl. Hence, my wardrobe consists of lot of long skirts, jeans and cute tops, just like any normal girl in real life. Since I am playing a Bengali girl, and considering Bengalis have beautiful eyes, we are paying detailed attention to my eye makeup. I would be sporting a high pony in the show. This look will be a breathe of fresh air for me as well as for viewers since all my earlier looks have been typical daily soap looks. I have always played intense characters; and comedy is a new genre for me. But it is fun coming out of my comfort zone and trying new things. I will give my best and hopefully will stand out."

Jayshree's character Macchli will bring a new element of love and romance in the show as Kapi will be seen using various antics to woo Macchli all the time.