Zee’s Dance India Dance, produced by UTV is gearing up for nation-wide auditions to get their talents for the competition. And as reported by Telly Buzz earlier, the contestants will be trained by a set of 4 renowned choreographers, of which Terrance Lewis, Remo D’Souza and Geeta Kapoor were already finalized.

According to our source, “Pony Verma is the fourth choreographer joining the team”. 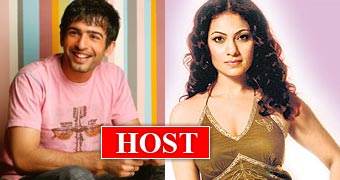 Featured Video
Giving us info on the hosts for the show, our khabroo says, “The heart throb of television, Jay Bhanushali and Tarana Raja Kapoor, the popular radio jockey and actress will be hosting the show. They have been finalized.”.

However, when we called up Jay Bhanushali to congratulate him on his first assignment as host of a reality show, the actor seemed clueless and asked us, “From where did you get this news? I am enjoying my free time chilling at home with family. I have not been approached for a show like this”.

The auditions for the show began at Jaipur yesterday, and it is heard that the turnout there was huge. “There were 600 people who gave their auditions. The four choreographers will be joining the casting choreographer for auditions in the main cities”, adds our source.

The search for the judges is still on. On the big names approached to chair the judges’ seat, our source states, “We have approached Madhuri Dixit, Mithun Chakraborty, Kareena Kapoor and Priyanka Chopra as of now. But nothing has been decided till now”.

As we welcome the choreographers and hosts on board, let us wait and watch to know about the big celebrities who will join them as judges..

13 years ago i hope jay hosts it... i wish the news had been confirmed by him:S

13 years ago cool...would like to see priyanka and jay.

+ 3
13 years ago yea i''m so ahppy for jai....i just luv him....but heart felt sad wen he sed dat I am enjoying my free time chilling at home with family. I have not been approached for a show like this”. first,kayamath was his show along widprachi but it now turned to shabbir''s n panchi....i still love neev-prach jodi like anything......congtzzzz jai....loove u

hopefully i''ll be able to see this and jay in it!!