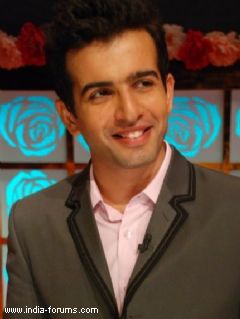 Is Jay Bhanushali the next tv hunk who will go the Bollywood way? Well we are hearing rumors that the actor who is currently in Color's Kairee was said to be doing Dabangg 2! Jay is rumored to being close to Salman as well as a big fan of the superstar.

When we contacted Jay, he was unfortunately unavailable. However, his wife Mahi revealed, "Yes Jay was supposed to be a part of Dabangg 2 but unfortunately it did not work out!" While Mahi didn't want to reveal anything more, our sources close to the couple revealed that there was a dance sequence in the film which both Jay and Mahi were supposed to be a part of along with Salman Khan and Sonakshi Sinha. However, since Jay was busy shooting for DID and then Kairee, he had to drop out.

Popular television couple Nandish Sandhu and Rashmi Desai are said to be making an appearance in this much awaited Salman Khan film! We wonder though that while television actors are waiting to hit the big screen, how Jay let go of Dabangg 2 with his favorite Salman Khan just due to date issues. Is this the real reason or could the story be something different?

+ 4
8 years ago thank for the awesome articles...jay doing great job in kairee

Anyways I doubt that was the reason!!!!!!

+ 6
8 years ago poor jay...he missed such a golden chance...hope for even better opportunities for him in future...he is doing gr8 in kairi

+ 4
8 years ago @likithakmh yup agree with u dear ,, me 2 wish to c my fav jodi KaranIka with my fav Salman sharing the same screen :)
cant wait for Dabangg 2 ;) Salman & KaranIka rockzzz ^_^

+ 4
8 years ago Hunk? lol... or Hanky? hahah... Well the title sounded as if he was to star in the lead but as it turns out, its an item number shared with salman... sensationnn!! haha