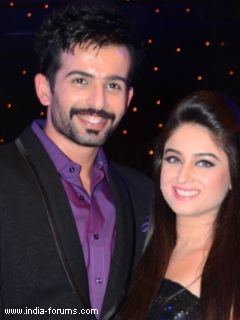 As the year is about to come to an end, many couples are already making plans to fly out for the upcoming year.  Duo Jay and Mahhi seem to have combined work with pleasure as we hear that the couple has a show in Chicago after which they plan to extend their trip by spending some time in LA.

The couple who was last seen taking home the Nach Baliye 5 trophy has after then been working on different shows and projects due to which they haven't gotten much time to spend together.

Recently Mahhi Vij had to opt out of Yeh Hai Aashqui as well due to a severe eye infection. But now looks like the couple finally is getting some much deserved time to spend with each other.

When we contacted Mahhi she said, "Yes we both have a show in Chicago and so we decided to combine it with a small vacation. I am extremely excited as New Year's is a fun time to spend in the US."

We also got in touch with Jay Bhanushali who quips, "I have been shooting for DID recently and though Mahhi and I had gone to Dubai, we have been waiting for a nice vacation and hence the year end becomes a great time to get away.  I am looking forward to spending some quality time with Mahhi and just de-stressing after a hectic working schedule."

R. Madhavan opens up about the release of Nishabdham; says ...
24 seconds ago

“Prabhas’ passion for cinema only drives him,” says Radhe ...
a minute ago

Sidharth Pithani to record statement under 164 CrPc, may ...
5 hours ago
View More
TOP