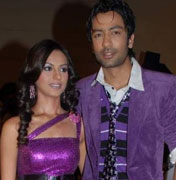 The very much in love couple Jatin Shah and Priya Bhatija finally tied the knot yesterday, on April 15th with just their close friends and relatives attending the wedding. For the uninitiated, Telly Buzz got this news perfectly right a month back, when our source had clearly told us that the duo was getting married on April 15th. We had even called Priya then, but she had rubbished this news as rumor.

According to our source, "Jatin and Priya wished to keep the wedding a very private affair owing to the sudden death of Jatin's father couple of months back. This was the reason why they did not want to include media too in their joyous moment. The wedding was a traditional affair and took place according to the Gujrati custom".

Jatin Shah is a Gujrathi while Priya is a Sindhi.

We wish the couple a very happy married life…

SNBR 13 years ago We are happy that you married. May God Bless both of you.

bhambras 13 years ago wish them a happy married life .....congrats to both of you.......nice couple

SNBR 13 years ago Congratulation Jatin & Priya, May God Bless you both.

+ 2
13 years ago congratzz to the newly wedded couple

13 years ago Aww wow, many congratulations to them. I wish them a blissfully married life. It is always great when a young couple in love confidently stick to their convictions and commit to each other 100%. It is nice to know some celebs put family before career! Love you guys. Keep rocking.

+ 5
13 years ago Awww bless, congratz to them!
Private affair wedding have been very popular lately, first Karan-Shraddha n now Jatin and Priya... wish them all the best!