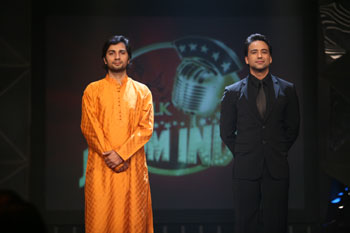 The countdown to the finals of SaharaOne television's musical reality show JJHOOM INDIA has started. This Saturday, January 12, viewers will get to watch the final singing performances between Jodi No 5 Sachin – Madhushree and Jodi no 2. Varun – Akriti. Based on this final battle, the first actor singer jodi will be declared the JJHOOM INDIA champion jodi of season one to be announced on the grand finale episode to be aired on Friday, January 18.

JJHOOM INDIA provided platform to television artistes who thought they couldn't be actors and singers at the same time. Viewers were treated to stage performances by 10 dynamic jodis of popular television actors paired with professional playback singers where they got along in the hope to make some beautiful music together. 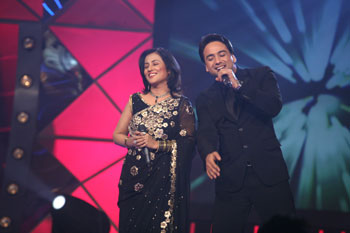 It was all through a mesmerizing journey for the 10 jodis who competed in the show and tried their best to make it to the top. But Jodi no.5 Sachin - Madhushree and Jodi no.2 Varun –Akriti finally made it to the finals. Both these jodis have been the most appreciated, by one and all. It isn't just hard work; there is lot of time, energy, patience, perseverance and determination that drove them to be among the best two – the finalists of Jjhoom India.

Having reached the grand finale, Sachin believes that the key aspect to remember now is stay relaxed and be more focused. "I always got good points. Just once I didn't receive great remarks and I was voted out. But what happened at that juncture only helped me come out of the competition sphere. The fear of losing went away. From the time I am back, I have sung all my songs in a relaxed manner because I am no more scared of consequences. I am in fact giving my throat ample rest so that I don't over exert. Having reached the top two, Madhuji – my mentor and I are only concerned about jury and audience liking our song selection." 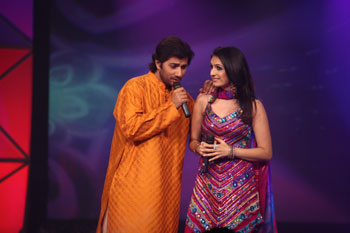 On the other hand Varun Badola always thought he knew a lot about music until he participated in Jjhoom India to realize that how much ever one learns music is less. "I haven't had formal training in music but have learnt listening to Lataji, Ashaji, Kishori Amonkar and several such veterans. The last two months have been extremely enriching due to the musical knowledge acquired. The credit for my success this far is because of Akriti – my mentor, Ananth Vaidyanathan – Vocal trainer and Rajeshwari – my wife and my best critic". Varun too agrees on the song selection part, saying, "The confidence to attempt a particular song comes only with practice. I love the song Naina Thag lenge from Omkara and wanted to sing it from day one. But I was shown the mirror and advised to sing it only when I had achieved a certain distance in music. If I had attempted to sing Naina in the first or second round because it is my favourite song, I would have been out long back."

The 12 week of intense battle fought between the 10 participating jodis have churned out the top two extremely talented jodis competing for the JJHOOM INDIA crown! It's now the final chance for them to give everything to see their dream of becoming a singer come true. So don't miss to catch the final performances by our awesome twosome jodis this Saturday January 12 at 9:00 pm on SaharaOne Television as they render songs in three different rounds from three different genre namely songs from Black and White era, songs from Colour era and Sufi music. For voting your favourite jodi to win them the JJHOOM INDIA crown kindly refer the details below.

So India, watch the finals of JJHOOM INDIA on Saturday, Jan 12 at 9 p.m and vote for your favourite jodi to make them the JJHOOM INDIA champion, to be announced at the Grand Finale episode on Friday, Jan 18 at 9p.m.

14 years ago Wishing to see the best performance from ..rooting for Varun more.

May the best man win!