View Profile
The 'Chocolate Boy' of Bollywood, Shahid Kapoor is on a career-high after the stupendous success 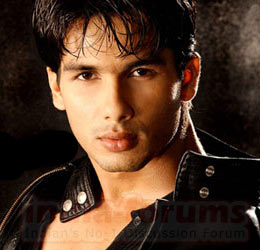 Featured Video
of solo hits, Vivaah and Jab We Met. As the dashing star aims to hit a 'Hatrick' at the box office with his next solo release, he is being treated to a feast of offers from many big banners.His forthcoming solo hero projects include Aziz Mirza's Kismat Konnection, Ken Ghosh's Musical, two big-budget films under Yashraj Films and a film to be directed by his dad, Pankaj Kapur.

His youth and fabulous acting prowess is sure to take him a long way, and if the recent reports are to be believed, Shahid has now been cast by the master craftsmam, Vishal Bharadwaj for his next production, and this is surely a stamp to the acting caliber of the young star.


An Aamir Khan in the making, Shahid Kapur has just started his journey towards super stardom and the future really looks bright for the lad!!