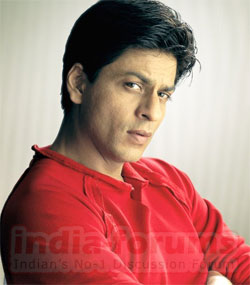 Featured Video
Pictures splurging big money on its publicity. But Shah Rukh Khan says no amount of money can surpass the goodwill he has created.

'After this film people will love me. And nobody is going to use the money to oust the goodness that I have created,' Shah Rukh told IANS in a chat.

'The filmmaking business is already an expensive thing but then there is a market that is getting you that money back. I don't think you need to spend money to make money. Having said that, yes, outside players like Sony Pictures and Columbia Tristar are hugely moneyed,' Shah Rukh added.

While 'Om Shanti Om' has been produced under Shah Rukh's own banner, Red Chillies Entertainment, 'Saawariya' has Hollywood studio Sony Pictures as co-producer. Both are releasing Nov 9.

But Shah Rukh is all ready for the competition.

'You have to compete. And by god's grace after this film, I will have enough money to compete with them on money terms also.'

He candidly described his much talked about six-pack abs in the eagerly awaited 'Om Shanti Om' as a marketing trick.

'The film is meant to be more celebrative and fun... I will not put it beyond the fact that it is a part of marketing to attract attention but it is also an inherent part of the story. It has a character that requires that kind of physique.'

But the superstar believes that more than marketing and stars it is content that dictates the success of a film.

'There is no denying that content is king. If you have good content in a film and you present it in whatever manner... whether it is 'Chak De! India', 'Om Shanti Om', 'Don' or 'Swades', I think at the end of it all, people only like good content,' said Shah Rukh, who was in the capital for the Hindustan Times Leadership Summit.

'There is nothing beyond content - no stars, no marketing.'

Director Farah Khan has roped in 31 stars, including Jeetendra and Rekha, for a special song in 'Om Shanti Om'.

'The film required a sequence with film actors because the film is about filmmaking. It makes it look more authentic. On the lighter side, it is very helpful if people like to come and see some items and stuff.'

The actor has plans to build his own studio. However, he will have to wait.

'There is no place and nobody gives me the land! (Smiled)'