View Profile
Shah Rukh and Salman Khan are big superstars and hence fought it out also like superstars at Kat’s birthday party. Unfortunately, Sherya Saran and Shweta Bharadwaj aren’t that successful yet so these two damsels chose to fight it by taunting and eye to eye killing. 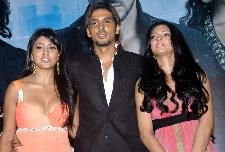 At Mission Istannbul press release at Intercontinental, Andheri we noticed that Sherya and Shweta were not really that comfortable with each other. Both being stars from the same movie showed no bonding at all. Looking at them seated in different corners, the duo seemed as if they are India and Pakistan cricket fans and can’t tolerate each other.

A volley of questions were thrown at almost all the stars that night except these two gorgeous ladies, and when finally one journalist expressed his desire to ask Sherya a question, Shweta’s face turned pale and ugly (as if Pakistan had hit a six in the last ball and won the match). She made such facial expressions that for a second we thought that she wanted to vomit badly. It was later we realized that the two actresses were into a cold war.

Shweta had one more reason to probably hate Shreya (for which we will probably side her). Shreya was no doubt looking as stunning as ever, giving photographers full opportunity to zoom into her low cut dress revealing her cleavage to the fullest. While on the other hand poor Shweta who had come in a fully covered colorful gown sort of dress hardly got any attention from the media.

Off course we can understand Shweta’s feelings. It’s her debut movie and obviously she wanted more attention from the media (which she unfortunately didn’t get).
We would have to wait and see what this babe would now do to get the media attention back. Meanwhile, by her killer looks on her rival at the event she’s surely going to give it back to Shreya.

Beware Shreya ! Shweta is coming for you.