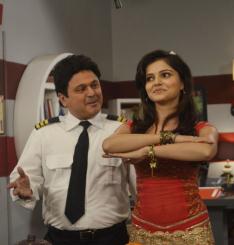 While there was news doing the rounds for quite some time now that SAB TV's show Jeannie Aur Juju will be going off air but till now there had been no confirmation from the star cast, channel not the production. Well now it's finally out that show will bid adieu on 9th June. We called up the Rubina Dilaik aka Jeannie of the show for confirmation and she said, "Well even I have heard the same but I don't know the reason behind it. At the end its channel and production's call so it would be better if you ask them. I really can't comment on it."

Our source from the channel confirmed the news too and stated, "There were talks before also about show going off air, before the entry of Rubina but channel thought to give it a chance. Fortunately audience liked the work of Rubina and channel decided to give an extension of 6 months. Thus by the second week of June, the show will be pulled off air. Channel has some new shows waiting in the pipeline which may replace this time slot."

Another source from the sets of the show said, "Well even we have been informed a week back but the channel and production house is yet to announce it officially. This will happen in June only and the dates would be finalized of wind up the shoot. Though everyone is sad about this news but what starts has to end."

We tried calling Ali Asgar too but all our efforts went in vain.

avinashrubina. 6 years ago will miss u rubina...pliz come back soon with a bang

prachianand307 6 years ago Miss u Jeannie & i hope to see u soon in another new show.Love u so much Rubi di.

avinashrubina. 6 years ago Rubina Dilaik,
we will miss you as Jeannie very much,got the opportunity to see you in comic role, & you proved to be perfect in timing essaying expressions, which really needs pinpoint perfection, we wish you worlds bestest of best wishes..love you forever,

JagaKalia 6 years ago I loved this show from its beginniing very much..loved both Gia Manek and Rubina Dilaik as Jeannie..This show is definitely a much better comic show than some shows in the channel...anyways i wish the entire cast a very bright future...

PS whats with all the dislikes? Some one even said she hates Rubina why just because she replaced Gia...is it that personal that make you hate i repeat hate a person without knowing her personally..this is really childish

beauty.rubi 6 years ago we will miss u jeannie aur juju.will miss juju,angels,chatur,durga ji,vela all.bt whom we will miss the most thts none other than u Rubina Dilaik(jeannie).u r the best jeannie.Rubina Dilaik rocks.. the best luv you

chotibahoo 6 years ago Hi Rubina, Will definitely miss you a lot. You are the only reason that I am still watching Indian TV. Once you are no longer in any of the show, I'm going to say goodbye to all the hindi shows...

Tazzi 6 years ago Rubina Dilaik,
we will miss you as Jeannie very much,got the opportunity to see you in comic role, & you proved to be perfect in timing essaying expressions, which really needs pinpoint perfection, we wish you worlds bestest of best wishes..love you forever,

Srigayathri 6 years ago I really miss u and JAJ very much.. u are fabulous in comedy also.. wish u get a new show.. pls accept new show only.. Take Care

prachianand307 6 years ago Rubi di miss u so much cute,funny beautiful & lovely jeannie.