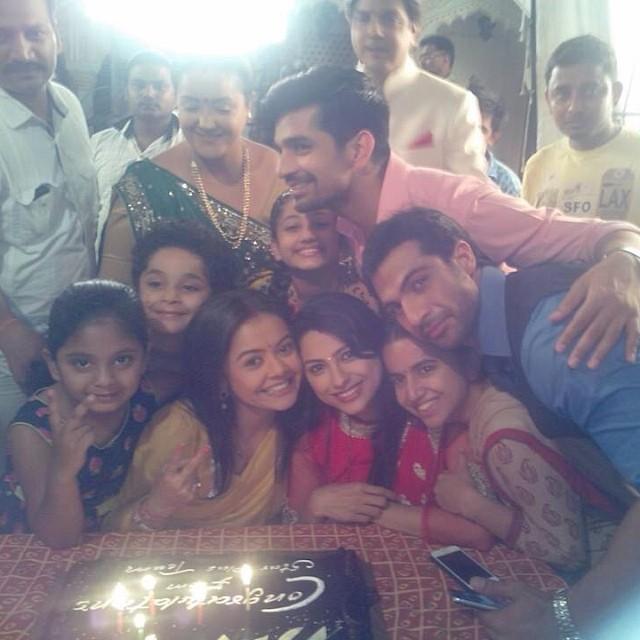 Rashmi Sharama Telefilms' popular show Saath Nibhana Saathiya has again regained its first position on the TRP charts after a long time. Recently also it managed to bag the number one position at TRP charts but then was consistent with the number and was in the top five shows.

So to the show's team celebrated the occasion by a cake cutting ceremony the sets.

The show currently focuses on Kokila (Rupal Patel) who has lost her memory partially and so she is unable to recollect the names of the members and also sometimes mistaken with the characters.

Soon the viewers will witness an interesting track where they will see that Jigar (Vishal Singh) who is assumed to be a driver by Kokila asks him to leave the house as she thinks that he is having an affair with Jigna who is her sister. She assumes Rashi (Rucha Hasabnis) to be Jigna. Kokila thinks that they both are having an affair and has to find a solution for the same.

As per our reliable sources, "Jigar and Rashi will enact as if they are married and will come back wearing a garland to show Kokila about their marriage to each other as they were in a relationship. This will make Kokila very furious as she doesn't want to accept their marriage and lots of drama will take place in Modi Parivar."

Will Rashi and Jigar's efforts help them to stay together or they will have to face a severe punishment by Kokila.

leavesandwaves 6 years ago Atlast. the original no. 1 is back to its rightful place.

A-Musing-Me 6 years ago The leap has sure worked well with the show... love Rucha Habnis as Rashi n her pair with Jigar(Vishal Singh) is real cutesy n adorable...
Congrats to the entire cast

But please remove this radha character from the show .

silvermoonlight 6 years ago This whole Koki thing is just plain annoying now. I think even the cast is getting annoyed.

rucha hasabnis and vishal singh rock as rashi and jigar..

sparkling_gems 6 years ago Poor Jigar and Rashi.. cant be together because of Kokila's mental condition.