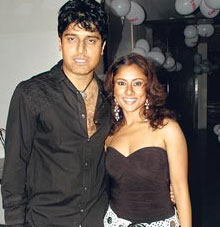 The 2 year long run of Ek Ladki Anjaani Si comes to an end as the serial plans to wrap up on 12th September. The story which started off as the tale of an 18 year old ambitious, yet playful Ananya, went thro many twists and turns, which included Kanchi Kaul being replaced by Sai Deodhar. The real-life jodi of Shakti Anand and Sai Deodhar kept the serial going with their awesome chemistry for nearly one year now. But every good thing has to come to an end, so can this serial be an exception?

Our sources say that Sony has planned to give a new look to their serial slots, one such unique concept which is in the launch stage is Amber Dhara. “The recent soaps on Sony have not managed to garner good TRPs; hence the channel is now looking forward to newer programs”, seems to be the motto of the channel now.

15 years ago Should have ended when Kanchi left the show. After that it was just a parade of non-sense and immorality.
SET should be ashamed of running such a crap in USA.
Indians in Bharat are used to taking sh..t from Politicians and WHAT NOT. In here they will excommunicate this SONY crap.
Now you know SONY where you stand !
And that your ranks have gone down because of that for sometime now.
And is time to learn and realize what is good and Not good-at-all !
Ciao!

15 years ago waited for it to end a long time ago. too many loose ends in the story.

It started out as such a nice and interesting show, after they changed actresses, the show just went downhill. What I was unaware of was the chemistry that the author of this article was talking about! I never noticed anything, for all I knew they could have been siblings...or friends.

hudda 15 years ago thank goodness,
have dragged it long and far enough!

telly buzz u made my day!

15 years ago About time!! It had turned beyond pathetic...and sorry I don't agree with the awesome chemistry bit....i've seen that real-life couples look pretty bad cootichie-cooing on screen.

+ 7
15 years ago Good news, I am looking forward to ambar dhara.

15 years ago Thank God ..it seemed to continue till ages..