View Profile
Diana Hayden has drifted in and out of the spotlight. But her few moments on the screen have always been enigmatic and alluring. Here she is back on the television front as mentor on Fact Universal Teen Pageant on 9X.

Read on for more of the dark fantasy… 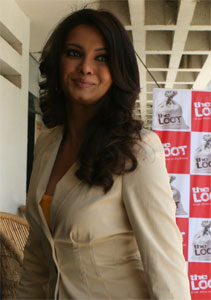 Featured Video
How is it to make a comeback to TV?
I don't know why people keep saying it's a comeback. It's not like I had bid adieu to television. It's not a comeback at all!

Tell us about your new show, on 9X.
It's a reality show where teen girls with potential would be groomed to be a model. They would be groomed for their walk, their gait, their speech and they'll even be taught to shake their leg a bit!

What is the criterion for judging?
Well, the girls should possess personality. And of course they should be within the prescribed age limit of 15 to 19 years.

Personally what would you look forward to in the girls?
Confidence. That's the one most important thing I want the girls to have.

Can you explain more on your role in the show?
In short I'm the girls' mentor. I'll be there to give them useful tips, boost their morale and lend a supporting shoulder when they need one.

Do you relate to these girls since you yourself have been through this?
No not all. Because what I was during my pageant, these girls are not. They are quite mature.

Don't you think 15 is too early for the girls to get professional?
That's what even I thought. But the present generation is way ahead of what we were. They know exactly what they want. They are super focused. Plus, their parents are there supporting them in every step. So what's the harm?

How do you think this beauty contest is a cut above the rest?
Well, this is the first reality show where you would see teen girls living together and fighting to complete their tasks. Plus, it's also a beauty pageant! Has any show before Miss Teen India provided all these elements?

Your choices of projects seem choosy. After History channel's Biography you have chosen this show. What made you round in on this one?
Well I was in Big Boss too.

Yes but as a participant.
Yes right. The concept of working with young girls seemed enjoyable to me. So I took this up.

How different is it to work with 9X?
The quality of production is good. People are very professional. The producer, director, basically the whole team is really good.

There are similarities between this show and Petra Nemcova's A Model Life. Your comment.
Well, I haven't seen the show yet. But this show in India will maintain its individuality.

You didn't take up any Bollywood projects after Ab Bas.
Because I fell in love with television. Even in LA I have my agent for television and not for movies.

What about Hollywood? Do you think you would fit that mould better?
It's not about fitting the mould. It's about loving what you do. And I love television as a medium where I would get to interact with the audience.

Since the time you were crowned Miss World in 1997 till now, you have never been linked with anyone. Have you been genuinely single all this time or is it just that the media never got wind of it?
(Laughs) no I haven't been single all this time. And there have been instances of a writing here and a snippet there. Some had been true but just so the record is set straight I am totally single right now. Not at all seeing anyone.

So what's the best part of being single?
Well, you still get to pick and choose!

+ 2
13 years ago Sorry but you got this wrong. This appears to be simmilar to not only America's next top model but also MTVs Teen Diva"

13 years ago she is one smart lady with beauty, poise, confidence...verything

+ 2
13 years ago thankss- she sounds a bit arrogant..hmm or is it just me? but she's still very pretty and a great role model for teens to look upto/.