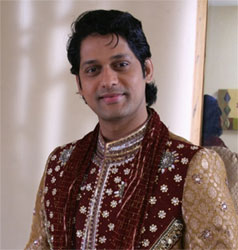 The prime time show on Star Plus, Sangam will soon go thro’ a major twist as the key character of Shekar, played by Rajesh Shringarpure will be killed.

But the cast and crew of Sangam were left clueless as Rajesh refused to shoot his cremation scene. The buzz around is that that actor was feeling really uncomfortable to lie on the pyre and even after continuous requests from the production house i.e. Fox Studios, the actor stood his ground.

Was it a superstition that prevented Rajesh from enacting this scene or was it some sort of fear?

Telly Buzz tried to quiz the actor to come clear with what he felt. “I refused to shoot the scene not because of any superstition, or not because I feel it is not auspicious to lie on the pyre. There is no specific reason for my denial, but my conscience did not permit me to enact the scene on that particular day”, clarified Rajesh.

He then adds on to say, “This does not mean that I will never lie dead; in fact, I have shot many times in my career lying on the pyre. But somehow, I did not feel like doing it that day”.

When asked Ashish Khurana, the Director of the show, he says, “I really do not know what happened during that particular shoot. But I heard that Rajesh did speak to the creative team and requested them not to call him for this particular shoot. He is a very good actor, so I guess he had some reason for not doing it. As a director, I had to shoot this scene, so we used a body double wherein Shekar’s body is placed on the pyre and his brother Saagar, played by Chaitanya Choudhury comes and cries over the dead body and then lights the pyre”.

You may never know, probably Rajesh got really sad that his character was dead and gone in the serial, and hence refused to shoot!!

+ 5
14 years ago thanks that is funny though that actor has to shoot so many times his death scene may be that is what got him.

14 years ago nooooooooo!!! i didnt want shekar to die!!

14 years ago thnks 4 the article..but i will miss shekar