If last week on Zee TV's Dance India Dance saw the Season one and Season two contestants joining together, this week will be star-studded too and even more gripping. 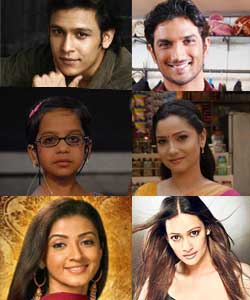 "Sushant and Shakti's performance was the best. The unit also celebrated the birthday of Terrence Lewis, and the Mentor made sure he gave good challenges to the contestants this week. A cake cutting ceremony was organized for Terrence, in which all contestants and celebrities had fun", informs our source.

This week, Amrita Mitra will be eliminated from the contest.

As per our source, "Dharmesh Yelande secured highest votes, while Punit Pathak and Shakti Mohan got the second and third highest votes respectively. Amrita was in the bottom along with Amarjeet Singh".

Govinda will be the celebrity judge this week.

As the countdown to the Grand Finale slated to happen on 24th April begins, the production house is trying hard to get Hrithik Roshan to grace the Finale Episode..

sensodyne 10 years ago Sushant and Anki both were superb today!!
Shakti and Amar were also great!!

mihali7 10 years ago thank u rresham and Iluvdid, punit is shit!! shakti deserves to win n as an untrained dancer amar is fantastic. and amrita is also awesome. wayy better than binny but just cause of her smile she gets votes.

rresham 10 years ago omg amar is the best and there is no doubt about it....india is not voting for him for some reason and it makes me very sad to see him over and over again on that red sofa!!! pls let's all vote for our amazing amarjeet :) i can't stand to see punit receiving more votes than more deserving candidates; he's just awful!!!
p.s. i love govinda...can't wait to see him as the judge :)

satwik-m 10 years ago this did fellows are really waste.how can punit secure second highest and amar in bottom 2.he did very bad dance of mj even the worst dancers can do better.this did is not like reality show.this is the worst voting.

This week Amrita out
Dharmesh highest vote followed by Punit( very surprised) then Shakti, nest week Amar will be out.
( I still can
t figure out how Punit is in top 4 when Amrita and Amar is out. seems like this has already been fixed. Punit never gave a good or difficult performance. I get it Binny smiles a lot, but atleast she gave many difficult ariel performances which Punit failed big time last week when he performed. And Amrita - she alawys got good comments throughout from all 3 judges and also a truly versatile dance, she did bollywood classic, contmp everything, in limelight I am shocked that none of teh masters mentioned her name wheras they couldnot find any fault in her dance. And this week she is even out.Punit did a very bad MJ act and hanginging act both fri and sat and still he got 2nd highest - INdia is shocked. Is zee manipulating votes?

Nisha1994 10 years ago y is neil bhatt - abhi of 12/24 kb nt invitd 2 perform in did??? He is an excellent dancer! He has won boogie woogie competition nd was an participant of kaboom!