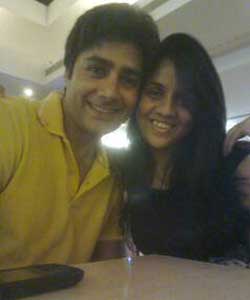 Tellybuzz has earlier reported about  Mujtaba Ali Khan popularly known as Aditya of Imagine's Sarvagunn Sampanna who is in a relation with Itishree Singh. Recently we hear  that the couple broke off.

According to our source, " The couple recently called off their relationship as things didn't work out between them. The couple was in relationship since 8 years but it was on an off thing and finally now they decided to call off."

We contacted Itishree who confirmed the news, "  Yes we are not together anymore. I was never engaged to him, we were together for 8 years but we have finally decided to  part ways as things were not working out between us."

We contacted Mujtaba Ali Khan who refuse to comment anything.

+ 2
9 years ago lol man do theses kinda celeb crake me up.

+ 3
9 years ago have no clue abt them but I agree with @tara. perhaps IF has no answer for this question.

9 years ago Looking @ Itishree Singh, a song by Baha men comes to mind..
'Who let the dogs out' LOL!

It took her 8 years to finally part ways as things were not working out between them... A good joke na?

11 years ago Bipasha Basu...
All the best

11 years ago Bipasha Basu..
her latest movie is All the best

11 years ago Bipasha Basu ------ All the best with Ajay Devgan, Mughda godse

Trolled for the goof-up in poster, Team reveals the underlying ...