The last of the wild card entrants remaining in the camp of Sony's Iss Jungle Se Mujhe Bachao, Jay Bhanushali is the latest to pack his bags and leave the show. 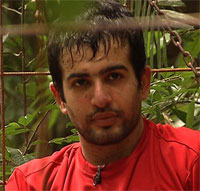 Featured Video
According to our source, "After the twin eliminations of Marc and Aman and of course not to forget, the staged walk-out of Kashmera Shah last week, the contest had gotten fierce with just five contestants remaining. And tonight's episode will see the chocolate boy Jay Bhanushali bowing out, as he was the one who got the least junta votes. Along with him, Akashh and Mona were present in the danger zone, but had a narrow escape courtesy more votes when compared to Jay".

"The elimination was purely based on the fact that Jay got the least votes amongst the remaining contestants; there was no Maha Jungle task given to the bottom two contestants this week", adds our source.

This leaves the show with the Top Four – Akashhdeep, Chetan Hansraj, Anaida and Mona Vasu.

As we get closer to the Grand Finale to be held on September 4th, we will be seeing one more elimination happening this week, which will decide the three finalists of the show!!

Till then, make your choice on the final three!!

+ 3
13 years ago YAYYYYYYYYYY now i have all my favs on the show (except for akash offcourse)
hope we get to see a new TB article soon saying "Akash finally out!":D:D:D:D

+ 3
13 years ago very much expected...the show practically wants either Akash or Chetan to win...who the hell is voting for these two characters is beyond me....

+ 5
13 years ago I have to go to say this, NOT A SUCCESSFUL Show at all !
This show has way much DRAMA ! and I don't get it why is Akash still there, People are complaining about him a lot, He should be out !