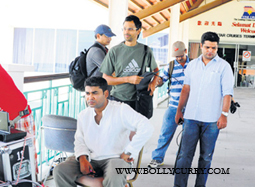 anymore. With the amount of songs the Indian Film Industry produces, one song is bound to overlap another. However, the question is -has the song been intentionally lifted or not?
Falling into limelight for such an accusation is the upcoming sequel, Bheja Fry 2. Lyricist Shabbir Abbas, has accused the team that the song "Ishq Ka Keeda" from the film's music album has been composed by him, thus pronouncing it stolen.
While the production house has credited Ishq Bector as the soul writer and composer of the song, Shabbir Abbas has stoutly refused to accept that. He even informed director Sagar Bellary though a phone call that he is the original creator of the song, but the director waved him off thinking it to be a prank call. However, a few days later, the same prank call became a reality check for Bellary when a legal notice landed on his desk.
With the song being on air for quite a while, the question now being asked is that if the song has in fact been written by Shabbir Abbas, why didn't he claim offence before now? Bellary was quick to answer, believing that Abbas is only trying to gain some publicity and profit through the accusation.
BollyCurry can't help but be of the same opinion of Bellary. It's not like it hasn't happened before!

Huma Qureshi Loses Cool; Says She has been 'Unnecessarily ...
18 minutes ago

2020 is Turing Out to be a Fruitful Year for Prabhas!
18 minutes ago