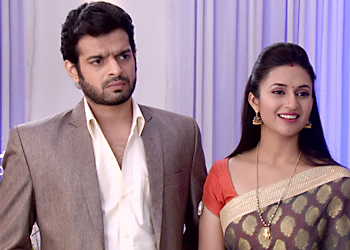 After a lot of tension and high voltage drama in Balaji Telefilms' popular show Ye Hai Mohabbatein which airs on Star Plus, the show will highlight Raman and Ishita's cute fights and some light moments in the forthcoming tracks. This time Raman (Karan Patel) and Ishita (Divyanka Tripathy) will enthrall the viewers with some cute moments together.

Further, our source adds, "A thief enters the house and following the noise, Raman and Ishita go inside their room and they fall on the bed after getting scared of a cockroach. This is followed by a nice comic scene of Raman where he talks to the thief. Later, the viewers will get to see how Raman and Ishita complain about each other to a radio channel. Soon after which Ishita will notice that the curtains of the house have caught fire and while she tries to douse the fire from the curtains, her dress will also catch fire which makes Ishita petrified. Seeing each other hurt, they both put ointment on each other."

We tried contacting Karan Patel but he remained unavailable to comment.

So, we hope the audiences are going to have a fun time while watching the light comical moment between Raman and Ishita after the last week's tension filled episodes.

sumatra1234 6 years ago Karan Patel and Divyanka Tripathy are the best!!!!