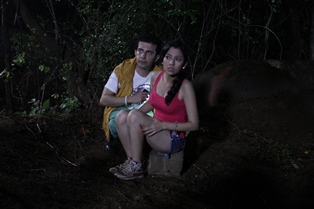 As wise men once truly said, Love is like a virus, it can happen to anyone'. But who can think of falling in love at a place, as strange as the one claimed to be haunted? The upcoming episode showcases an amusing love story of Kaavya and Nihar, who bump into each other in the most unusual situation at a spooky place.

Kaavya, an elegant and sophisticated South Mumbai girl is having a hard time in her relationship with an over possessive boyfriend - Manish. Since she cannot dump him directly, Kaavya comes up with a plan that would make Manish dump her and thus, she lures him into a romantic night, promising him to make his night special'. Manish is excited about his romantic night, but his happiness turns to ashes, when he learns that his night out is atan allegedlyhorrifying place which is said to be possessed by spirits.The couple soon bumps into Nihar, a self-proclaimed youngJaat from Saharanpur who has set up a base camp there, in a hope to shoot his encounters with the ghosts for his channel.

Soon, strange noises and the fear of leopards compel themto abscond the place. But this will just be the start of an amusing journey followed by series of events for their struggle to flee from the place and amidst all this, Nihar and Kaavya will come closer.

Will Nihar, Kaavya and Manish find their out from the haunted park? Will love blossom between Kaavya and Nihar?

Akanksha Juneja: I am in love with my character in Saath Nibhana ...

Payal25 9 years ago this is horrible!
No lesson has been learnt at all!

xxMATSxx 9 years ago I think Shruti Sheth said it best. Cant thiese stupid terrorist find another hobby! Seruiously, its disgustingthat such people exist in this world. I just dont understand smetimes why God punishes the innocent and lets the guilty roam free and wreak further havoc!

I pray that anyone and everyone effected by this tragedy, is safe! Those who may not have made it, I pray their souls find peace, their families and friends find peace and the ability to overcome and move on in life, and I pray those that are the cause dont find a place in even hell.

R1U2K3 9 years ago I wish I could compel these terrorists to blast them off themselves instead of doing it in countries!

Yuvika_15 9 years ago its reali sad..i hpe the govt n police find the traitors tht r hidden inside the country as well as those outside..becos theres no doubt there is a traitor within thts helped thm succeed in this mission...der always is... damn all those ppl who r behind these attacks..they wil neva live in peace!

Nikhi. 9 years ago It's just really sad. My deepest condolences to all of Mumbai.

-kirulicious- 9 years ago I agree with Neil, but at the same time also with Farhan..Though you never know who is a part of the bombings..Maybe some Indians also? It's SICK! :/ It's freaking shocking. Humanity doesn't exist in Terrorists dictionary.

aish_punk 9 years ago this is just so horrible. i agree with most of the tweets here. i really dont understand whyy someone would like to take someone else's life :/ leave alone soo many!

.Reshama. 9 years ago it is really bad news my hart goes to all the people in mumbia..who withnist this and those people who didnt survice this attack.
my prayers/condolences are for all survices and who died in this terrorist attack.
Mumbia people stay strong because there are people who needs ur help
=(