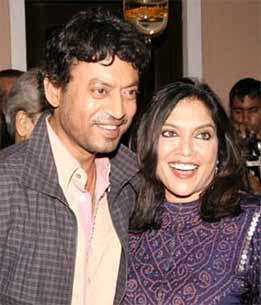 Brilliant actor Irrfan and internationally renowned US-based Indian director Mira Nair are likely to again team up for "The Bengali Detective", a film about a middle-aged detective in Kolkata who is keen to learn contemporary dancing.

The two share a mutual dmiration for ever since they created magic in "The Namesake" in 2006.

Thereafter Nair did a short film called "Kosher Vegetarian" with Irrfan and Natalie Portman in the lead.

Nair was keen that Irrfan play the title role in her last film "The Reluctant Fundamentalist". However, Irrfan was not keen on playing a terrorist.

Nair, we learn, has zeroed in on Irrfan to play the Bengali bhadralok again in "The Bengali Detective". Irrfan had played a Bengali to great impact in "The Namesake" as well.

However, Mira needs to check out Irrfan's dancing skills before she takes the final call. This is where ad filmmaker Piyush Pandey comes in.

Irrfan said: "Mira wants to see if I can dance or not. In my latest ad for Piyush Pandey, I am seen dancing. I am sending that ad to Mira to evaluate my dancing skills."