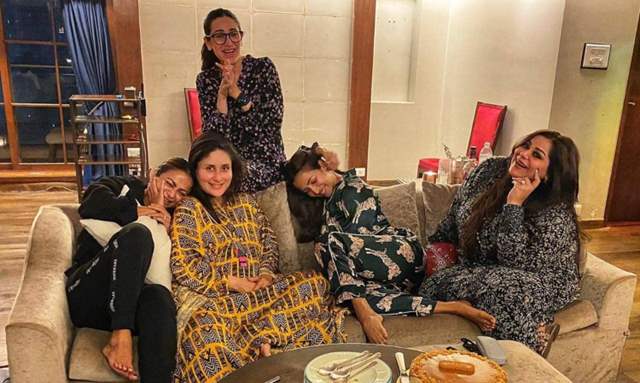 Actress Kareena Kapoor Khan is expecting her second child with Saif Ali Khan. The couple will soon welcome their ‘baby #2’ and elder brother Taimur Ali Khan also seems to be excited about the same.

Reportedly, the Pataudi's are moving out of their current house to a bigger apartment that is right opposite to their current residence.

Kareena seemingly hosted a farewell party for her residence as her family will soon move out. The celebration was sorts of a girls night which saw the attendance of her best friends Amrita Arora, Malaika Arora, her sister Karisma Kapoor, and makeup artist Malika Bhat.

The group members shared the same picture where the gang is seen chilling on the couch with lots of desserts laid out in front of them, as everyone’s caption read: “It’s been a Fortune of memories ...to new beginnings now #fortunenights #fortuneyouhavebeenkind #endofanera.”

Previously, in an interview, Saif revealed that he has been overlooking the renovation work of their new home and will soon be moving out to the bigger apartment. Reportedly, the actor will put his old flat to rent.

On the other hand, Saif and Kareena made the most of their quarantine time together with their little munchkin Taimur Ali Khan. While the actress continued to work through her pregnancy, she is also very active on social media and keeps posting pictures to keep her followers updated, which are a delight to look at.

Recently, the couple was also seen hosting a lavish family dinner at their residence. The party saw the attendance of Tara Sutaria, Aadar Jain, Armaan, Anissa Malhotra among others were papped as they arrived at Bebo's residence.