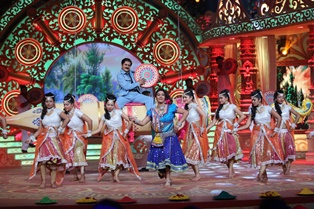 Sucheta Khanna aka Indumati from SAB TV's Lapataganj - Ek Baar Phir' was a part of a dance performance with the other SAB TV actors for SAB Ki Filmy Holi'. During the act there was a shower of colors on the stage which covered all the dancers in different shades. After the performance, Sucheta decided to quickly freshen up and get into another dress to look prim & proper.

When she went to the vanity van for a change of dress, the other SAB TV actors got together and hatched a plan to shower her with colors once again! The moment she stepped out of the trailer a range of colors were showered on her clean dress by all the actors. Sucheta too got in the fray and showered all the others with the same set of colors. An impromptu celebration of Holi happened out of the blue outside the van.

Sucheta said, "It was hilarious. We all were busy enjoying each other's performances and I was eager to get back after my performance to join the others. I had no idea that these people are waiting for me to come out of the van and douse me with color again. I truly enjoyed the color session which followed after their prank. I showered every one of them with colors as well!"

All we can say is that SAB TV actors sure know how to spread the colors of happiness around them!