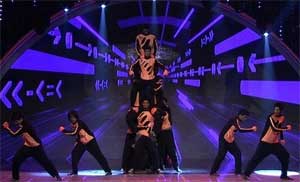 After more than two months of struggle and entertainment, Colors' India's Got Talent 3 finally reaches its culmination point.
Last week the contestants performed in front of Hollywood beauties Hema Malini and Esha Deol where they showcased their best of the best.

A source declares the winner and says, "Suresh and Vernon Group won India's Got Talent 3. The finale was graced by none other than Badshah of Bollywood Shah Rukh Khan for the promotion of his upcoming movie Ra.One."

The finale will be aired on 1st of October...

arunima_LUIT 9 years ago hollywooodd beauty ..LMAO ..anyways I dont think this grp was that good , The south Indian magician grp , bad salsa were better n even the painter ..:( ...Booo

shinyclassic 9 years ago I wanted the bad salsa grp to win,,anyways congrats to the winner,,,

sanw 9 years ago I wished the painter had won. he had always impressed everyone. also salsa was good. anyways...congo to the winners

cl0wn 9 years ago Looks like Esha Deol bribed the IF-forums to write that she's a "Hollywood beeeoooty" ...lmao

anitarani 9 years ago Bad Salsa deserved to win...Very very disappointed with the result.