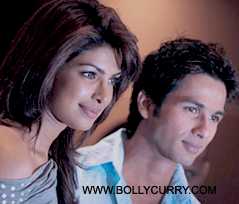 couple - Shahid Kapoor and his former flame, Priyanka Chopra.
Their passionate act in Vishal Bharadwaj's unconventional hit Kaminey raised several eyebrows, leading to their appearance on the popular chat show, where it seemed evident that the duo were in a relationship. And how can we forget the 'Shahid-in-boxers-at-PC's-door' controversy! In a nutshell, both of them were seeing each other. However, the adorable affair soon saw took a turn for the turbulent, and the couple split on what were rumored to be not-so-amicable terms.
Now, news of the pair signing an forthcoming Kunal Kohli romantic film tentatively titled Teri Meri Kahani has elicited a jaw-dropping reaction from the masses and the media alike. With the shooting of the flick having kicked off some time last month, the ex-couple were reportedly seen having a gala of a time with one another, and they are once again the talk of the town! No sources have claimed with commitment, though, that the two have officially reunited, leaving open the possibility that they are *gasp* mature and professional enough to interact normally in spite of bygones.

A rekindled romance, a publicity stunt, or nothing more than two actors doing their job - we're eager to know what you - our expert analysts - discerned from this story!