View Profile
The Bad Guy of Mamta now portrays the young charming prince in Sagar Art's latest venture Jai Maa Durga. In the era of mythological stories on the small screen, Abhishek Ohri joins the race as a young prince. The Telly Buzz team talks to the actor who cannot seem to get enough of his role, and also leaks out a little bit info on his secret agenda of hitting the big screens... 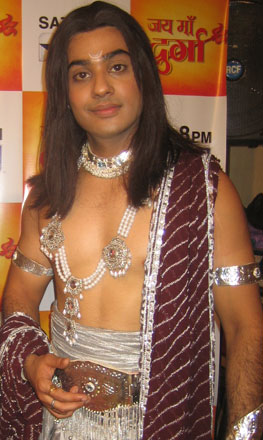 Featured Video
After playing the bad man in Mamta, you are here in Jai Maa Durga as a prince, how has the transition been?

Mamta has given me the recognition, and I truly enjoyed playing the bad guy in the show. I was on a break, visiting my home town - Delhi for a family function, and that’s when I got a call from Sagar Arts.  After a couple of screen tests, everything worked out and I found my self playing Prince Surat.

Can you give us a little insight to what’s in store with the show?

It’s a story of a prince and a princess, and the power of Maa Durga. Initially the track focuses on the love story between the two and when things go a little sour Maa Durga comes to earth and the story kicks off.

How has it been shooting so far?

We have been shooting in Baroda most of the time. It’s been a wonderful experience so far. The sets are beyond words. The production house has invested more than four crores on building the sets. The sets remind you of Sanjay Leela Bhansali’s movies. We’ve all put in a lot of effort and made sure everything goes beyond perfection. The team behind the scene are highly creative and have a great eye for detail.

Have you gone thru any specific training for a role like such?

No, everything happened at last minute and we didn’t have much time to prepare, yet I’ve made sure I deliver more than 100 percent to the role, and try my best to do justice to the character, and bring out the best in me on screen.

This is a weekly show, so do you plan to do anything other than this?

Yes, I am on talking terms for a movie, it’s too early to disclose anything. I don’t plan to do a parallel serial along with this, but I guess I could manage a movie, with this being a weekly show.

A message for your fans..

Thank-you for supporting me during my Mamta days, which helped me bring out the best in me, and I hope to get your love and blessings for the new chapter of my life. I promise to work hard and leave a mark on Indian Television with Prince Surat.

dreamy-zainy 13 years ago He was so HOT in mamta..n m lookin foward 4 dis show n m sure he'll do a great job like he did in mamta! ;)