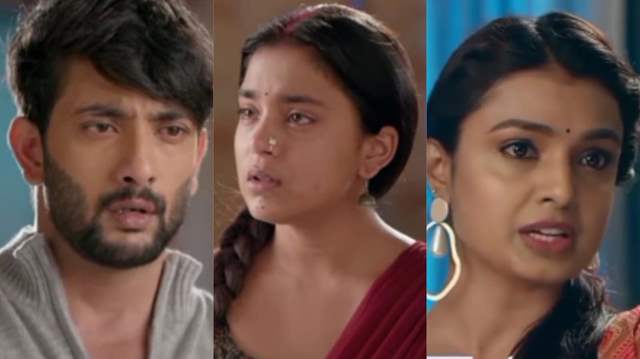 Star Plus show ‘Imlie’ is getting quite interesting with each passing episode. The current track of the show revolves around Imlie ending up at Rathore mansion to rescue Cheeni. The family is elated with Imlie’s return and are hoping for her to stay. However, Imlie is certain that she doesn’t want to get back to Aryan.

In the upcoming episodes, Narmada gets happy with Imlie’s return and tells her to stay back but Imlie tells her that she has only returned for Cheeni and will get back to the village with Cheeni. Malini manipulates the family and tells them that Imlie has returned only as she’s is facing financial crunch in her life. She badmouths about Imlie and Cheeni lashes out at Malini. Imlie asks Cheeni to behave with Malini and she holds on just before revealing that Malini is her mother. Imlie instead states that Malini is elder to her and she should behave with her.

Arpita asks everyone that they should let Imlie leave as she has decided the same. Imlie bumps into Aryan. They turn their back towards each other. Cheeni puts Imlie’s hand in Aryan’s. Aryan recalls loosing his baby and jerks off the hand. Cheeni, Narmada and others pray for Aryan and Imlie’s reunion. A fire bottle lands in Rathore mansion from the window. Imlie runs to save the family and Aryan runs to hold Imlie. They share a moment. Imlie reads a letter that was thrown along with the fire bottle. She learns about Bhaskar Times being in debts. Arpita informs Imlie how Bhaskar Times suffered after Aryan stoped taking care of the publication and Malini bought 50% shares.

Furthermore, Imlie challenges Malini that she will revive Bhaskar Times.

+ 11
3 months ago what abt that jyoti... universe bachi.... did she left without getting exposed :o

+ 4
3 months ago Je firee!! So excited for imlie to teach malini a lesson and kick her out of their lives for good 🤩🥳

+ 5
3 months ago Will we get to see boss and employee again? Anyway it's good that finally Imlie is standing up to Malini Je 🔥

+ 3
3 months ago why Imlie? What about MA in Business Singh Rathor?